Cleveland Clinic has received a lot of attention over the years, with their former CEO Toby Cosgrove outlawing fast food years before everyone else realized food and health are linked together.

Morrison Healthcare became the contract foodservice provider for the Cleveland Clinic’s main campus and Children’s Rehabilitation Center in July of 2017. Over 300 employees at Cleveland Clinic had been through several changes in management companies over the years, and, “when that happens, people lose faith and trust and energy,” says Nick Romagnano, Morrison Healthcare Vice President of Operations.

Due to the amount of change that the associates had been through, staff engagement was a top priority when Morrison transitioned on July 1, 2017. Morrison’s average hourly pay ($10.04) is higher than that of Sodexo ($9.80) which has made the staff happy.

Every shift, staff receive a meal in addition to being provided safety shoes and uniforms, a touch that brings engagement into focus from an appearance standpoint. Morrison immediately set up a “command center” in Cleveland Clinic, where employees could ask questions during the switch and directly interact with the Morrison staff brought in to help set up operations. A new system of digital shared documents further keeps everyone in the loop.

“When you transition any business, you bring in support,” Romagnano says. “In general, it’s one or two people and they stay for about week.” For large transitions like this, Morrison brought in corporate chefs, managers, and specialists to put into place retail and patient menus, special diet menus, concepts and plans for the future. Many associates stayed around three months to provide support and guidance. It took hundreds—if not thousands—of hours to “put Morrison’s diets in to make sure there were no hiccups in the database when we took over,” Romagnano says.

More than six months later, six people from the transition team are still on-site. During the week, the team gathers to get dinner to discuss what went well that day and what didn’t, in a relaxed environment with drinks in spirit of collaboration.

Ralph Turner, Executive Director of Patient Support Services at Cleveland Clinic stated, “I’m most proud of the accomplishments we have made in our food service program since we transitioned to Morrison Healthcare. The transition could not have gone any smoother if we had written a script for it.”

Initial Results at the Clinic

Six months in, Cleveland Clinic has started to see quantifiable measures. Press-Ganey patient satisfaction scores have gone up during the transition—a lot.

“Typically, in many transitions, patient scores usually go down, but a few months in, there’s been no downtick in scores,” Romagnano says. “Actually, we’re up six points. Statistically, if you move up one or two points per year, you’re doing something right.”

In terms of the push for better employee engagement, the turnover rate for employees had been between 50 and 60 percent, but it’s now less than 20 percent, Romagnano says.

Romagnano attributes this to new training programs (more than 5,000 hours of training total per month in dietetics, culinary, and safety) and the enthusiastic involvement of new Executive Chef Josh Ingraham.

“Josh has been a perfect fit for the clinic,” Romagnano says. “He’s known for his focus on wellness and when we first met, he said, ‘All this is amazing. This is what I want to do. I want to change the face of healthcare dining.’ He’s stressing that people live their best life. We’re here to help people heal; we’re here to help people get better.” The support of the Morrison transition team, alongside the chefs and operators, stresses the importance of our mission, bringing the power of food to Cleveland Clinic.

“When the staff has access to the chef and access to managers, that leads to a more positive work environment,” Romagnano says. “We’re getting that excitement here.”

Morrison’s biggest project at Cleveland Clinic has taken quite a bit of planning; we are transitioning the patient side to a room service model. Fourteen mini kitchens or pantries throughout the hospital are being outfitted for equipment and vents. Leveraging technology, ondemand ordering will allow for an accommodating menu without the restriction of dayparts for those patients wanting “pancakes any time of day” and anything else from the menu (within their dietary needs of course), Romagnano says.

Just before the transition, a hospital spokeswoman said, “patients at our main campus represent those with the highest acuity in the nation, which requires complicated foodservice operations to meet their special dietary needs.” Morrison’s vast portfolio of special diet recipes has been coming into play to help nourish these patients. 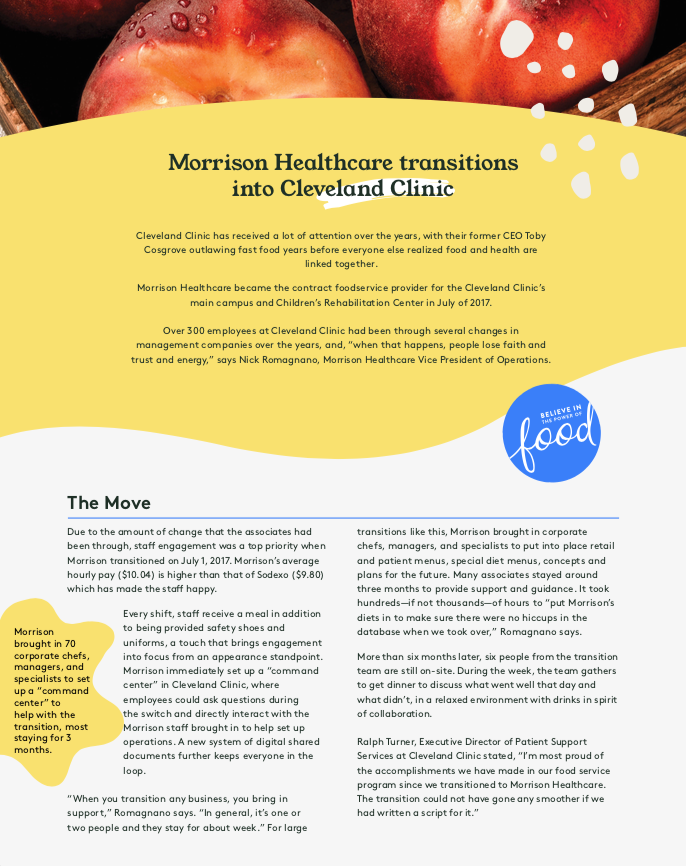