Café Renovation Leads to Increase in Sales for Monument Health

Monument Health is the leading medical center in the Black Hills of South Dakota and the surrounding areas. The 375-bed hospital offers a broad scope of services to the community and has invested in multiple renovations and construction projects in the last few years. They remodeled their kitchen a couple of years ago, but upon entering their contract with Morrison Healthcare, a Compass One Healthcare Company, in February of 2017, they were ready to give the café a much- needed makeover.

A café renovation was part of Monument Health’s and Morrison’s contract. Morrison provided the capital upfront, which gave the hospital system the motivation they needed to embark on the project.

When the partnership between Monument Health and Morrison Healthcare started, it was determined that the café was outdated and the space was not well utilized. “There was a lot of potential for revenue. We just had to improve the visitor flow and make changes to an already great space,” explained Suzanne Schoby, Regional Director of Operations for Morrison Healthcare.

Monument Health’s contract with Morrison included a clause that committed Morrison to provide the capital contribution to the remodel of the café, and that was a big motivator for Rapid City’s leadership team, according to Dave Ellenbecker, Vice President of Facilities Management at Monument Health. “It’s great to get the funding to support the remodel up front,” he said.

The renovation which started in the summer of 2017, included equipment updates, changes to the salad bar to improve customer flow, and a completely new look and feel. The first step was to remodel an outdoor area with grill options that was later used as dining space while the cafeteria was closed.

“For us, to be able to start partnering with the hospital right away was pretty amazing. The hospital had several construction projects going on at the same time, but they never stopped supporting us,” said Schoby.

“We couldn’t have done this on our own. We didn’t have the expertise in-house. We had remodeled the kitchen, but the servery and dining areas were lacking what’s needed to have a good dining experience,” said Ellenbecker.

“It was such a dramatic change. Staff and customers have given great feedback. We’ve seen growth in revenue. I’ve seen more people dining in the café than in the last six years. It’s more modern. It’s an uplifting experience, and people have better options,” said Ellenbecker. 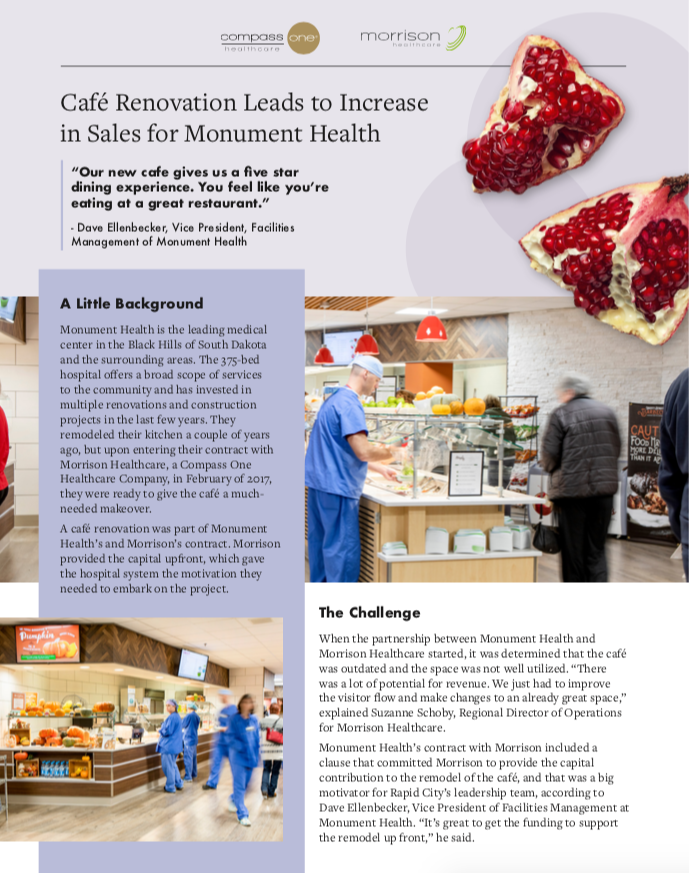